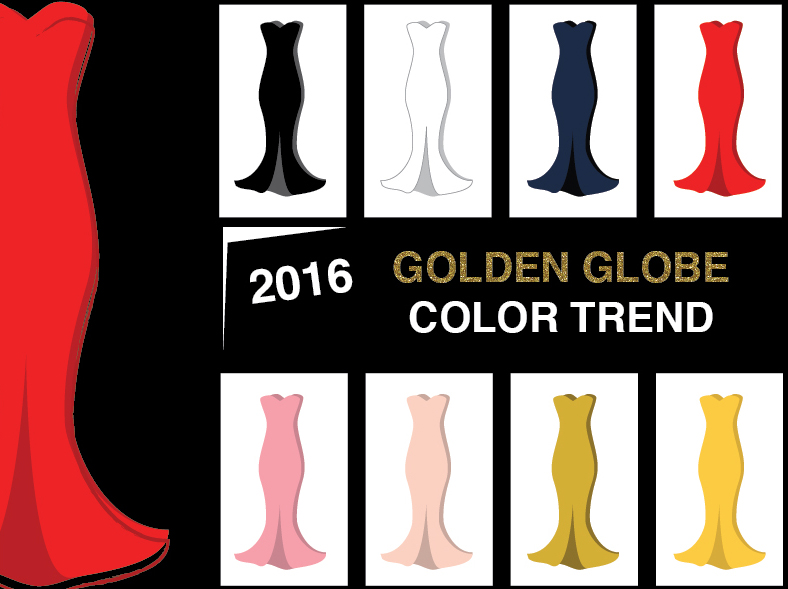 Recently it ended one of the major events affecting film and television, the Golden Globe in 2016 and obviously could not miss the parade of stars for the gala.
The men are presented strictly in suits dark, black or blue, women wore mostly long dresses signed by designers and renowned fashion house.
As with any major event worthy of respect, it discussed not only the awards but also on the stars and their outfits for this celebration.

What have been the most beautiful clothes? Who was the most elegant? What is the best make-up?

Personally, I was attracted by the choice of dresses. Great was the curiosity to discover the colors selected for this event by the stars, by the designers and fashion houses.

How did they dare the celebrities? What were the most popular colors?

One of the colors worn is the classic BLACK:

As an alternative to black many have preferred different shades of BLUE:

Many of the stars have opted for the ethereal WHITE:

Some have dared with the seductive RED:

And those who preferred soft colors in shades of PINK:

Who decided for the precious GOLD:

Those who have chosen more neutral tones from BEIGE to POWDER:

There are those who stood out wearing a bright YELLOW:

Black, blue and white have found some success.

The red, in its various shades, couldn’t miss to a gala event: it’s a definite color not easy to wear. The various shades of pink along with neutral colors have transmitted a sense delicacy to the event. The yellow and the gold instead have given undoubtedly brightness at gala.

Is it still very widely thought that with the black is not mistaken (or almost) never?

It’s appropriate to say: to each her own dress and color by the Red Carpet!

We use cookies to ensure that we give you the best experience on our website. If you continue to use this site we will assume that you are happy with it.OkPrivacy policy